The Satoa is celebrated in Kuopio on Friday and Saturday in August near Kuopio Market Square. Joyful and happy street food festival is a celebration of local tastes, where you can buy and taste small portions of food worth 3-6 euros in the spirit of street food culture and at the same time enjoy the program of the event such as performances by street musicians and artists. At the same time, the Harvest Festival www.kuopiontori.fi will be held at the market, which will bring a happy atmosphere to the market for two days, the delicacies of the harvest season to be enjoyed on site and taken home, and a program for all ages. In addition, creative and surprising Kuopio Juhlii city festival kuopiojuhlii.fi is celebrated.

SATOA is the street food festival in the beautiful Kuopio city centre, where customers can buy small dishes (approximate price 3–6 euros per portion). The Festival is organized every year, in the end of August. The festival will see the harmonious union of restaurants, food companies, artists and the people of Pohjois Savo creating a sensory delight.  SATOA Kuopio Food Festival celebrates the traditional harvest season and local tastes.  In addition to delicacies, performances by street musicians and artists can be enjoyed at the festival area absolutely free of cost. 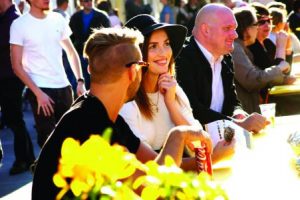 Do you want to join our events? We are looking for program and exhibitors from November to March-April, depending on the event. Please feel free to contact us for more information!